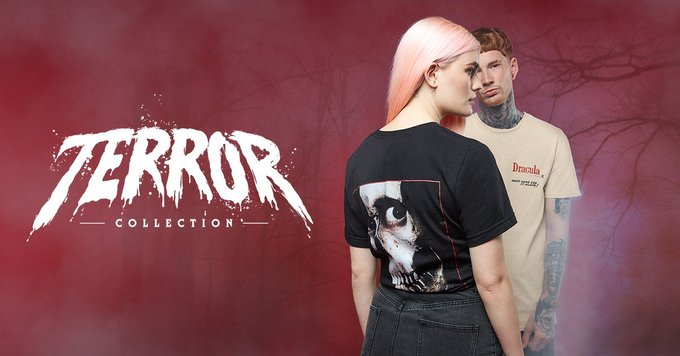 It was a cold, spooky night in Manchester…there was something strange going on within the King Street Townhouse in Manchester. In the basement below, the demons were not lurking, but instead, the cool ghouls from Zavvi and co. At the summoning of spirits from various press outlets, on display was the latest and greatest clothing range from Zavvi: THE TERROR COLLECTION. Celebrating all of your favourite horrors, the new range has a t-shirt for every horror fanatic.

As ever with Zavvi and their launch events, the party is more than a spectacle of the hottest pop culture fashion, but a fantastic Witch’s cauldron inclusive of a film screening and panel afterwards, mixed in with film snacks and delicious food.

The filmic spectacle of the evening was none other than ‘A Nightmare on Elm Street’ – a classic 80s horror, continually creepy and unintentionally funny here and there, the dawn of Freddy Krueger proved to be a deadly delight for those in attendance, be it first-time-watchers or seasoned veterans present during the ‘85 UK release. Before developing into an increasingly cartoony and comedic horror franchise, however, the original ‘A Nightmare on Elm Street’ – directed by Wes Craven – mixed sleep anxieties with sheer terror and blood. Great fun for those keen sleepers!

Featuring some of the usual suspects alongside new blood, the entertaining likes of Zavvi’s Emily Murray, illustrator Mark Bell, UNILAD’s Tom Percival, Zoe from Zobo with a Shotgun, and Paul from Blood Flicks, the post-screening panel initially brought to the table a great variation of first-encounters with ‘A Nightmare on Elm Street’ – from ex-rental VHS viewings to a Guinness Book of World Records (WTF?), this segment was as funny as ‘Freddy’s Dead: The Final Nightmare’. The panel did, however, progress to debating the rise of horror over recent years, including the Stephen King renaissance and progressive horror lead by Jordan Peele and Ari Aster.

As always, many congratulations go out to Zavvi’s Emily Murray and co. for organising a spooktacular occasion for the launch of the Terror Collection. With the most famed horror villains lacking a great sense of style – we’re looking at you Michael and Jason – you can be a Style Icon by purchasing the Terror Collection HERE – buy it now before your dream becomes a nightmare…

Question: Who is your favorite horror villian?
(Leave your answers in the comments section below!)

Thanks for reading our coverage and please let us know what you think about the new Terror Collection range! Leave a comment below or drop us a tweet over at @HCMovieReviews.