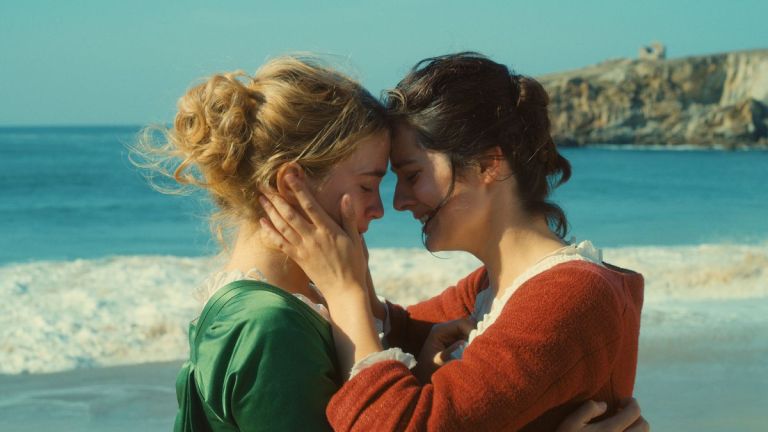 Céline Sciamma’s Palm D’or nominee and winner of the Queer Palm and Best Screenplay at Cannes, ‘Portrait of a Lady on Fire’ is slow burning and profoundly intimate. Written and directed by Sciamma the film follows Marianne, a painter commissioned to do the wedding portrait of a young woman on a small French island at the end of 18th century. Celine Sciamma throughout her filmography has delved into the female perspective and female focused relationships in modern society and although ‘Portrait of a Lady on Fire’ is set in the eighteenth century that modernity is still present.

The narrative draws you into the mystique of the lady on fire by building her reputation from the perspective of Marianne long before we meet her. Its pace and rhythm throughout is slow, Sciamma shows no desire to rush into anything the characters are not yet ready for. A choice which benefits the film greatly, the slow but natural progression on screen is one of the film’s many triumphs. While also finding the time to meander into a beautifully sensitive sub-plot that reveals so much about the two women and their relationship. Furthermore the director achieves so much with the camera. Every shot is well crafted, many are painterly in their use of colour and the natural landscapes work as a stunning backdrop to the unfolding relationship. Sciamma uses the frame to restrict audience perspective and fill single shots with layers of unspoken meaning.

Noémie Merlant as Marianne and Adèle Haenel as Héloïse are two of the strongest arguments for why this film succeeds at such a high level. Both performances are complicated and layered that help to realise two opposing, but deeply emotional characters. Marianne is a cosmopolitan artist from Paris who has come to the island for work whereas Heloise is a troubled young woman preparing to be wedded off to a stranger. Both leads are incredible in achieving a natural relationship that is bursting with feeling but restricted by the world around them. The supporting cast is minimal, a young maid played wonderfully by Luàna Bajrami, whom the two women befriend and the mother of Heloise who is committed to the painting being completed and the marriage going ahead. Both roles compliment the protagonists brilliantly and help to reinforce the restriction on their relationship.

‘Portrait of a Lady on Fire’ is proudly and powerfully feminine. Leaving any and all male interaction at approximately two lines of dialogue. This film succeeds because of its female perspective and shows what can be achieved when an artist is allowed to realise her work without hindrance. It begins at a small ember that is out of control by the film’s finale, if you’re willing to be absorbed the results are extremely gratifying. Going with as little knowledge as possible only enhances the experience. Celine Sciamma is an artist truly in control of her vision.

Question: What’s your favourite female lead foreign film?
(Leave your answers in the comments section below!)