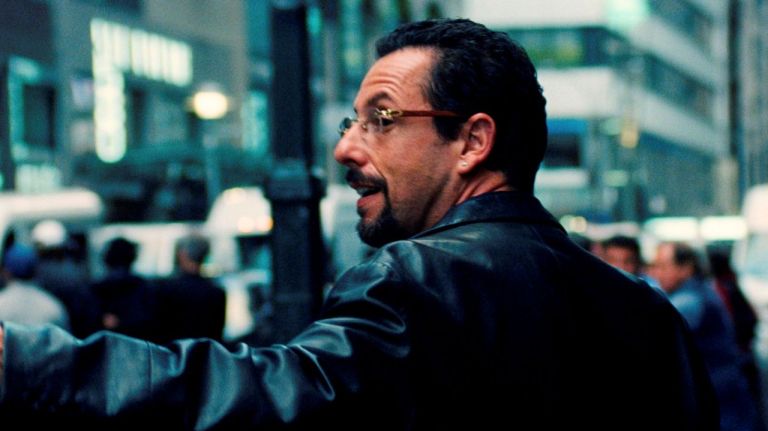 Josh and Benny; otherwise known as the Safdie Brothers struck indie gold with 2017’s ‘Good Time’. Now they return with the critically lauded turn of Adam Sandler; an actor mostly reputable for dumb comedies. Hitting Netflix in January for UK folk, does this trio produce a diamond cut or not?

Howard Ratner (Sandler) loves his sports as well as his material items but he’s racked up debts to multiple figures. He thinks his luck is in when he receives an uncut opal but famous basketball player Kevin Garnett, who plays himself here, wants to hold onto it for good luck. This sets into motion a series of events with Ratner wheeling and dealing and pushing himself into ever-stickier situations to make big bucks.

‘Uncut Gems’ is being praised left, right and centre so maybe I’m missing something but after catching it back in October at London Film Festival, I found the majority of it to be an annoying and shrill piece of film-making. A lot of the time this thriller/crime caper descends into abrasive angry noise; a jumble of irritation that may be the beautiful point for some but can easily be a disengaging slog for others.

The notion of comedy tries to rear its head throughout the run-time and a good selection of these ‘jokes’ fail which only adds to the feeling that the first two thirds of this feature are laborious to get through. It’s clear the Safdie Brothers are fully aboard the hype train of sheer adrenaline and manic money-making stress but this has their creation twisting into a repetitive farce.

At times it’s fair to admit that the farcical element is necessary and works well but the constant goings-on of Ratner are an endurance test not helped by the over-bearing screeching of his character. The film takes much too long to get to the brilliantly arresting final chapter and you may very well drift off during the multiple shots of New York walking and inner-city betting.

By the grace of good fortune and pacy writing, the last segment of ‘Uncut Gems’ does dazzle with surprise and seat-gripping tension. It’s a sequence of 20-30 minutes which wonderfully builds and builds like some wall of palpable anxiety, and somehow the directors and writers manage to concoct dramatic edge in a world heavily lit by basketball and jewellery.

Adam Sandler is fine in small places but he cannot shake off the yelling character of nuisance he so often plays. Lakeith Stanfield is an interesting presence but is all but forgotten amongst all the noise and Idina Menzel crops up as Sandler’s exasperated wife and like Elsa, you’ll want to let about two thirds of this film go.

Reflective surfaces, glittery items and urban streets look the part, but for me, that cannot shake off the mostly loud and overlapping headache of noise booming through this shouty narraitve. ‘Uncut Gems’ has a staggeringly solid finale crafted with expertise but it’s in no way a 24 carat movie.

Question: What is your favourite Adam Sandler film?
(Leave your answers in the comments section below!)