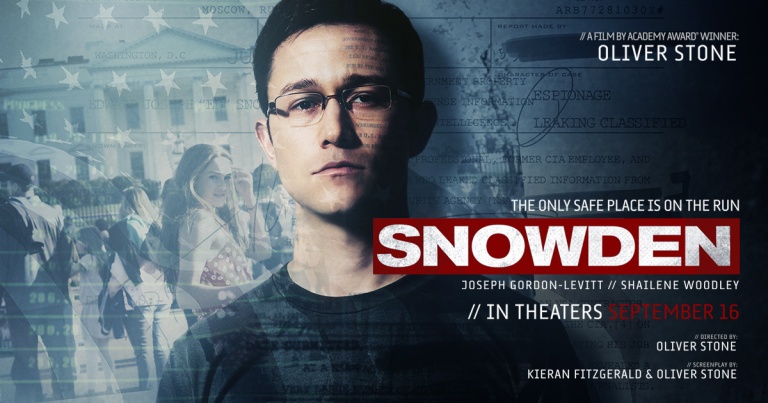 Snowden the man, and Snowden the scandal are two things so often referenced in movies and television shows these days. Somehow in my ignorance of world news I knew nothing about either and always wondered just what it was all about. Thank goodness someone, Oliver Stone, has come along and made a movie about it. With one of my favourite actors, Joseph Gordon-Levitt, playing the lead role I was more than ready for my education of all things ‘Snowden’.

For those of you who, like me, are a little oblivious to the story, ‘Snowden’ is a film about Edward Snowden a computer professional and ex-employee of the CIA. The film tells the story of his discovery and release of state secrets to the world. As I mentioned earlier the lead role fell to Joseph Gordon-Levitt, clearly bitten by the biopic bug after last years ‘The Walk’. JGL is as usual very good in this role, he delivers his lines in an almost unrecognisable voice but one which is a good attempt at the real life voice of Edward Snowden. His on screen love interest is played by Shaliene Woodley, this is the first time I have seen a performance of hers outside of the ‘Divergent’ series. She is agreeable in the role and the couple have a pleasing level of chemistry, it’s never fully believable but there is enough to serve the purpose of the movie. It’s hard to judge anyway, certainly from my perspective of knowing nothing about the real life individuals or their relationship. Alongside the two lead performers ‘Snowden’ has an enormous cast list including the likes of; Melissa Leo, Nicolas Cage, Rhys Ifans & Zachary Quinto to name a few. None of these actors really get that much screen time and it ends up that it’s Snowden’s CIA coding buddies which are the most developed and best portrayed by the supporting cast.

The film starts well introducing audiences to the man, Edward Snowden and his early career. This stage of the film is interesting as the story takes it time to explain many of its elements. However, once things get moving I found it hard to keep track of things due to the large quantity of technological language being thrown around. You can usually get the gist of things although when large sections of the film are made up solely of dialogue, being unable to follow the script can be a problem. Much of this takes place in the mid section of the movie but as the narrative proceeds into its final act the film vastly improves. Whilst the whole film is very informative it’s this concluding section which is most satisfyingly so, with the business end of the Snowden scandal becoming the focus. It’s a shame that just as the film had drawn me back in and had gained it’s momentum once more the director chooses to include the real life Edward Snowden in place of JGL for the closing scenes of the film. Unfortunately this is rather jarring and I didn’t think it was necessarily appropriate for a feature film of this nature.

At times ‘Snowden’ can be a really dull film to watch, filled with conversations about computer programs and tech warfare leaving little time for techno dummies like myself to catch up. However, when the director gets his focus right and keeps things simple the film becomes a compelling watch. Overall by being substantially informative and bringing Snowden’s own debate back into the forefront of audiences mind ‘Snowden’ is worth it. This does come at the expense of some entertainment value though leaving me wondering if this narrative would have been better left to the documentarians.

Question: What is your favourite Joseph Gordon-Levitt performance?
(Leave your answers in the comments section below!)

If you enjoyed this review maybe you’d consider voting for me at the UK Blog Awards 2017. Follow THIS LINK to do so.