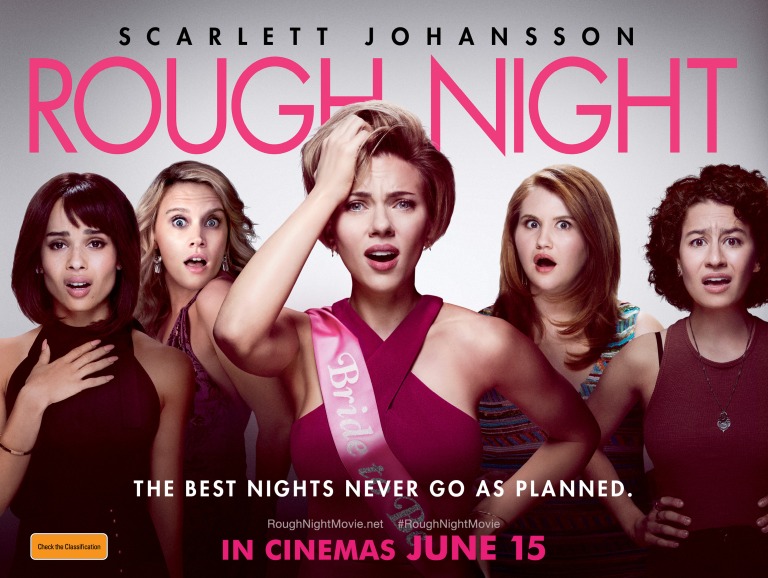 Jess, played by Scarlett Johansson, is an aspiring politician running for State Senate but all work and no play make Jess a dull girl. Thankfully her old roommates from college are on hand to throw her the best bachelorette party ever. As you’ve most likely seen from the trailers and posters things don’t quite go to plan. After a male stripper meets his unfortunate demise the gang of girls must work together in an attempt to cover their tracks. So could this ‘Girls Trip’ 2.0 manage to be anything more than the run of the mill ensemble comedy or would it just live up to it’s title and be a ‘Rough Night’ at the cinema?

Johansson is pretty big A-list casting for a comedy, more used to defending the earth with the Avengers than trying to make audiences laugh. To be fair her casting isn’t really for the comedy. She does well in the leading role creating the right kind of character necessary for this story to work. The rest of the cast are much more humour orientated, with the likes of Jillian Bell portraying the crazy best friend type character we’ve seen countless times before. Nonetheless Bell delivers, however it is Kate McKinnon who unsurprisingly steals the show. Like most films she stars in McKinnon alone pretty much makes the price of admission worth it. She plays Jess’s roommate from her year abroad in Australia which of course means McKinnon has an Aussie accent here. Probably the only thing that could make her funnier than she already is. Herself and Bell have a wonderful rivalry fighting for Jess’s affections which is easily the funniest aspect of the film. Furthermore, there are some humuorous cameo like performances courtesy of Ty Burrell and Demi Moore who play the polyamorous neighbours.

Aside from these gags the rest of the film features an acceptable amount of comedy. Audiences should know what to expect considering other recent comedic efforts, it’s very much more of the same and you’ll know your tolerance for these kinds of films. Although, it’s notable that the film is funnier before the incident with the stripper occurs, maybe suggesting that this McGuffin isn’t even necessary. It’s quite a dark turn for the film and it takes some time before it feels ok to be laughing again. You’ll certainly need to suspend belief to stay on board with the narrative the whole way through. However audiences will be buying their tickets to laugh, not for a perfectly cohesive story, although both would be nice.

Possibly a little better than expected ‘Rough Night’ should avoid the usually comedy filled ‘worst of’ end of year lists. The likeable performers, particularly McKinnon, make it a good enough time to keep your attention. Whilst the story is often a stretch to believe the humour present does succeed in distracting you from over-thinking it. Nothing overly original or special to add to the genre but yet another harmless but serviceable entertaining comedy romp. Someone get McKinnon a role on ‘Home & Away’ pronto though.

Question: Who is your favourite film comedy actress?
(Leave your answers in the comments section below!)