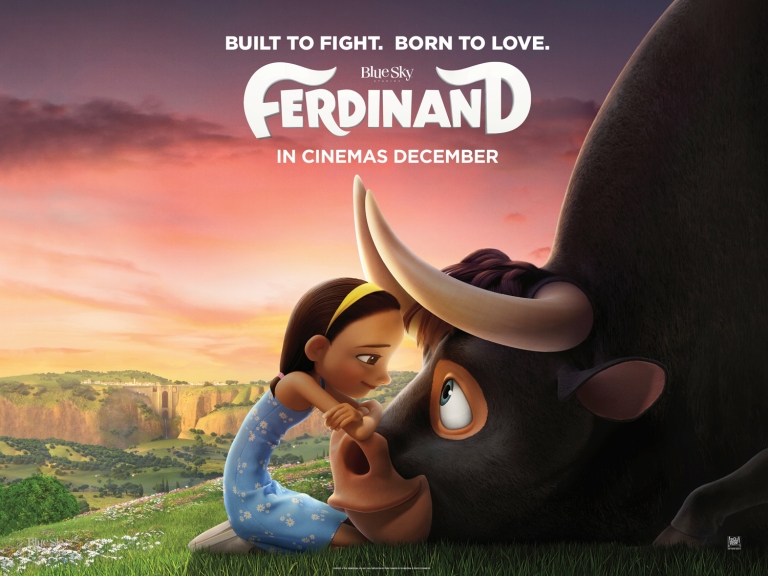 From the studio mainly concerned with releasing ‘Ice Age’ movies, Blue Sky Studios, comes a brand new animation entitled ‘Ferdinand’. Based on the children’s book, ‘The Story of Ferdinand’ the films follows a young bull who would rather spend his time smelling flowers than training to fight against matadors. As he grows up he has to maneuver the expectations of the world around him and maybe even fight, to be himself.

Wrestler turned actor, John Cena, plays the title role here. Whilst he certainly has the stature to play this larger than life character does he have the ability? I’ve criticised his acting work in the past so I’ll admit I wasn’t hopeful. I’m not sure if it’s just because you can’t actually see him this time around thanks to the animated nature of the film but he actually does pretty well. I’d go as far as to say that this is his best role to date, although that isn’t saying much but nonetheless I’m glad to see him in a watchable role.  He also benefits from the fact that the rest of the voice cast are good fun. As per usual Kate McKinnon steals the show from the moment her character, Lupe the goat, graces the screen with her presence. Her voice performance is fantastic and she really becomes the GOAT in terms of the characters in ‘Ferdinand’ being responsible for the majority of the comedy in the film. The rest of the cast includes the likes of David Tennant, Bobby Cannavale & Anthony Anderson who work well with their characters creating an enthusiastic group effort.

The narrative is fairly by the numbers and the message is obvious from the get go. Why over-complicate things though? There’s a lot to be said for simple and clear messages in children’s animations and if ‘Ferdinand’ teaches kids to do what they like and not let circumstances define who they are that’s nothing but a good thing. It might not be just as stimulating for an older audience but thankfully there are some enjoyable gags included. A lot of these come from the supporting characters, with a trio of condescending German horses being the most memorable. The film is also quite playful with all things bull related, whether it’s an extension of the well know phrase ‘like a bull in a china shop’ or a clever role reversal in within the bull ring ‘Ferdinand’ definitely has it’s moments. Although, it should be noted that it does touch on some dark territory which might raise more questions than it answers. The ethics of bull fighting and the meat industry aren’t shied away from here. However these issues aren’t fully delved into, and probably rightly so as they welcome some complex discussion, but parents might like to prepare themselves for some difficult questions from their little ones afterwards.

‘Ferdinand’ is a rather straightforward affair and doesn’t exactly grab the animation bull by the horns in terms of the genre. Despite this it’s well executed in terms of it’s solid message and fun characters. It’s nothing overly memorable but it entertains for it’s running time and it’s at least good to see something fresh from Blue Sky Studios. It should easily avoid the obvious labels of being nothing more than a pile of bulls**t and wouldn’t be a bad shout for keeping the kids entertained over the holidays.

Question: What has been your favourite animated movie from 2017?
(Leave your answers in the comments section below!)