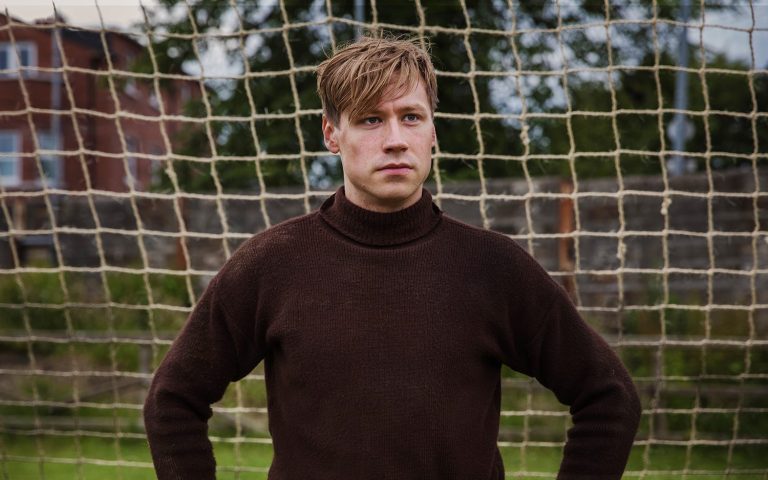 ‘The Keeper’ tells the extraordinary true story of sporting legend Bert Trautmann. When we first meet Trautmann he’s a solider, with a love of football, fighting on the front line of World War II. The film follows Trautmann from here on in, documenting his personal and professional life after the war. Directed by Marcus H. Rosenmüller and starring David Kross as Trautmann, the film has a strong German presence behind and in front of the camera whilst also being partially filmed in Northern Ireland.

It’s the authenticity that ‘The Keeper’ has that’s maybe its strongest element. The cast as a whole are a delight to watch but it’s the decision to cast such a talented German actor as Trautmann that proves especially beneficial for the picture. Kross is wonderful in the leading role and brings the man behind the name Trautmann to the screen in such a charismatic and moving way. His German heritage brings with it an atmosphere of realism to the picture that casting a better known, say British or American actor just wouldn’t have achieved. Furthermore, the screenplay’s presentation of Anglo-German relations post-war makes for a fascinating dynamic and its exploration of this issue is refreshing as it’s often forgotten about or neglected in this genre. The un-biased approach is excellent and subsequently paints war as the ultimate enemy and not either nation. This is a constant theme throughout the film and it is executed with maturity, sensitivity and care, creating an emotional and important discussion.

The film is ambitious in covering such a large period of Trautmann’s life but each main section is presented with confidence and is compelling in its own right. ‘The Keeper’ sometimes struggles with conveying the passing of time in an effective way and there’s a surprising amount of content within the final act. If anything, the film could have been longer in order to explore these moments in more detail. As biopics go two hours isn’t a massive runtime and there was definite scope to elongate this here. Nonetheless the film’s heart, emotion and humour always land and its good intentions are consistently clear. In addition to this the film has a great balance of biographical, dramatic and sporting content. Those film fans worried about the football overshadowing the screenplay can rest assured that ‘The Keeper’ is an incredibly well balanced film and will in no way alienate those who aren’t massive footy fans. However, there’s plenty in there for those who are buying their ticket because of this aspect too, it delivers this naturally within the screenplay in a most satisfactory way and in doing so will keep everyone happy.

Marcus H. Rosenmüller proves to be an incredibly safe set of hands for the directing of this powerful and poignant period piece. With so much content to cover it was going to be nearly impossible to keep a cinematic clean sheet, and a few flaws do slip through.  However, Kross and his supporting cast embody the heart of this screenplay in such a special way more than making up for any issues. At its core ‘The Keeper’ delves deep into the life of the man behind the headlines telling the story of how the atrocities of war can shape and influence something as simple as a little boy who just loves playing football. It will captivate you right up until the final whistle and may even leave you wishing for some extra time.

Question: What is your favourite football film?
(Leave your answers in the comments section below!)