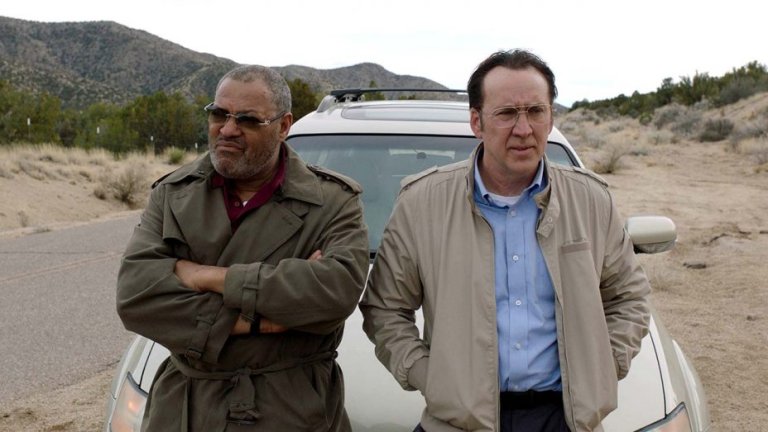 Despite what the title suggests, this isn’t a Van Halen biopic starring Nicolas Cage as David Lee Roth. Instead, it’s about drugs.

Opening with a series of almost juxtaposing images, we see both the glamorous side of drugs in the nightclubs with the players etc., and the fatally ugly side: murder. Like any good drugs movie, a beautiful range of locations are on show – ‘Running with the Devil’ plays host to desktop-esque locations from the Vancouver skyline to a semi-unspecified location captioned as, “Somewhere in Mexico.” It is within these varying locations that we are individually introduced to our players and subsequent connecting avenues.

Nicolas Cage – the name of this film – features as The Cook, who at first appears to be a runner/mule, but is in much deeper than he lets on to his wife. A man on a mission, The Cook is tasked with tracking down cocaine shipments and why the cuts are dodgy. He is actually a cook too. One of his contacts, in a surprisingly fun role, is Laurence Fishburne’s The Man – from a time-lapsed drug orgy to prancing like Ric Flair in the clubs, The Man is complete trash, but manages to somehow depict relatable struggles in everyday life. Throughout ‘Running with the Devil’, there is an array of crooked characters – maybe too many – but only three or four pose any interest: The Cook, The Man and Leslie Bibb’s The Woman in Charge. Bibb’s agent character is a woman with an edge, and she is both strong as well as scary. With an overloading of characters, resulting in a diminishing of the bigger players, there is an unfortunate feeling that the film has wasted its opportunity to produce great characters. Sadly for Cage fans, he doesn’t go “full Cage” in this one. The concept of his character, however, is probably enough to match the “full Cage” actions. Truthfully, old Nic is engagingly terrific in this direct-to-video delight, but like Fishburne and Bibb, is criminally underused.

As with any film involving drugs, there tends to be a subsequent debate or analysis over the depiction(s) of said drugs. In ‘Running with the Devil’, you’re more or less fucked if you are a user – a power suggestion that only negativity can come from drug abuse. Additionally, there is an irony with Nicolas Cage and drugs. In ‘Running with the Devil’, as mentioned, any association with drugs more or less results in negativity. Only last year, Cage starred in the extremely WILD ‘Mandy’, where we cheer and celebrate the drug usage of Cage’s character.

Writer and director Jason Cabell is masterful in mixing varying elements of drug crime in this movie, be it semi-comical elements with Fishburne or the grittier stuff with Bibb. Within the world of direct-to-video exists the trap of looking cheap, but under Cabell’s direction, ‘Running with the Devil’ exceeds any low expectations met with direct-to-video, and realistically, should be watched in cinemas now. Many congratulations go out to the production of this film.

Ultimately, is it fair to say that it’s refreshing to see Nicolas Cage in an immoral or villainous role? The downside here, however, is that Cage’s The Cook is just one of many naughty characters in this film, preventing decent and proper exposure of the character. As a film about the drug trade, ‘Running with the Devil’ is an interesting flick as we see, for example, the price per kilo rise significantly as Cage’s Cook’s cocaine travels between Bolivia and Canada. Though not a classic drug/crime film, ‘Running with the Devil’ is a must-see for any fans of Nicolas Cage, Laurence Fishburne, Leslie Bibb or films about drugs in general.

Question: What is your favourite Nicolas Cage film?
(Leave your answers in the comments section below!)

One thought on “Running with the Devil”